It all has to start somewhere so this is where it begins for this blog even though what I do with tackle making started long, long ago.

As a kid I loved the out of doors from the beginning. I loved the wide open spaces and the freedom to explore. I loved animals of all kinds.

We were pretty poor so the idea of fishing was more of a dream than reality until an aunt took my cousin and I fishing at a local lake in town. She'd bought me a plastic rod/reel set-up that had little more than kite string as line. A simple hook, bobber and worm managed to catch several sunfish and from that point on I was "hooked". A year later a neighbor asked if I wanted to go fishing with he and his son. He had an extra rod and I got introduced to the fine art of getting knots out of the line. And again, sunfish seemed willing to further plant in me the love for fishing. Perhaps a year later another neighbor was cleaning his garage and found a rod/reel he no longer used and asked me if I wanted it. That right there was a dream come true. These three simple acts were the seed for a love affair with fishing that has not died to this very day.

At about twelve years old the neighbor who gave me the rod asked if I wanted some Outdoor Life and Sports Afield magazines and handed me a bag full of them. Talk about seed for dreams....this bag was heaven in itself. Also in that bag was a Herter's catalog a year out of date. I think I spent more time looking at that catalog than the stories held in the magazines. In that catalog was a fly tying kit that was priced at $17.97 and the shipping was $3.25. Big bucks back then. I mowed lawns and had a paper route to earn money for spending and soon had enough saved up to order this kit. A lady at the service desk of a neighborhood grocery store, a Super Value in fact, helped me with a money order and addressing the envelope. The mail back then was slooooow. Or slower. And after three weeks I found a package at the door with my name on it. I opened the box and in front of me was a whole world of stuff I had no idea of what to do with. After reading the instruction sheet I got brave enough to put a hook in the vise and did so many times before the first thread was tied on. And so it started....

I was in eighth grade when the school began that fall and I had a phy ed teacher that I really liked. He fished with flies and we shared stories even though at that point in life I had no way to fish a fly other than on my hand me down rod and mono line. He told me of trout and I told him of sunfish. One day he asked me to bring some of my flies for him to look at. I did and we sat and talked about an idea he had for some very small flies, flies he referred to as "snow flies" because they ones he used during the winter months. The next day he brought a sample fly for me to study. Then I went to work making four or five colors of the same fly pattern for him and he bought every one from me. He soon had orders from other teachers he fished with and it wasn't long before I had quite the enterprise and it paid a lot more than mowing. Five years down the line another teacher made a block mold for jigs for me using oak. The mold made two jigs at a time, one about 1/8 ounce the other about 1/4 ounce. Soon I found myself in the jig business as well as the fly business.

Jump ahead some 49 years. I have had the blessing of working with some of the finest tackle companies on earth and friendships I have made along the way are countless and as rewarding as the work. I've staffed for several companies: Culprit, Mepps/MisterTwister, JBLures to name a few and worked thru three states doing distributor and sports shows on behalf of them. Today I have stepped away from the tackle companies with the exception of one, Do-It Molds Corp of Denver, Iowa. I work closely with the folks at Do-It and love what they allow me to pursue immensely. Do-It has been a leader in sand-cast jig and sinker mold technology for quite a while and within the last 8 years or so bought into the world of soft plastic injection to make fishing baits. This is my realm, where I can spend hours either creating baits and color combinations for myself or working with others, top-notch Do-It contemporaries, who also develop new and exciting ways to make soft plastic tackle.

So, from a plastic fishing pole to injecting my own plastic baits, I have traveled a long way. I owe thanks to so many who nudged me along and coaxed me to pursue my dreams. I've tried to teach my children to believe in their dreams...to "go-for-it" and do the best you can, that that is all one can demand of themselves.

As I grow into this blog I hope all who visit here to read find something to take with them when they leave. I intend to share some of my pictures, my tricks of the trade and some stories. Enjoy. 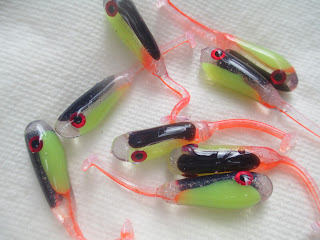 Crappie Tom Tackle
I'm a 66 year old retired construction worker. At about 13 years of age I started tying fishing flies as a hobby and just never quit enjoying making my own tackle. Today I inject my own line of soft plastic fishing baits and cast my own jigs. Nothing on earth is more satisfying than catching fish on something you have made yourself.